A customer called in after reading our Down the Rabbit Hole with Casi-Rusco blog. Their company was migrating from an old access control system with Casi-Rusco cards to another system.

Not only were they worried about the costs for badges and printing, but the project management nightmare loomed large. It had never occurred to us the extent of work that goes into moving access control systems. In their migration, there was a huge list of items that they needed to update, including:

For this customer, the hardware migration was daunting as they were looking to update:

This migration was specifically moving the card reader technology from legacy Casi Rusco readers to HID Signo readers.  The new Signo readers supported both their desired change-over to OSDP from Wiegand and the desire to provide mobile credential support from cell phones in the planned upgrade.

This badge reader change-over was going to be a significant expense and headache. Because the new Signo readers could not correctly read their existing Casi badges, they needed to issue new credentials to their entire employee population of 10,000 people,

The customer had done the calculations to migrate their 10K badges. The base cost for new badges was about $5. Beyond that, there were potentially lots of added costs, putting the cost range to migrate the entire employee population at a minimum of $50K and potentially up to $200K.

The Solution Was to Not Upgrade Badges!

The customer already was using our XPressEntry Handheld Badge System for Emergency Mustering, so they knew we could read the encrypted Casi-Rusco cards. Their hope was that we could help them figure out a way to migrate their database, so they could keep on using their existing Casi cards.  This isn’t a standard requirement for our line of work, but after providing the challenge to our engineers, we were confident we could do it.

Two weeks later, we had reverse engineered the CasiRusco encryption, reconfigured his Signo Reader output to support the Casi cards, and were able to convert his entire database of Casi cards into the Raw RF numbers which the Signo readers sent the the new PACS system. The customer said that they estimated that our efforts saved the company well in excess of $100,000.  More importantly, the headaches of not being able to use an old badge at an upgraded facility was completely eliminated.

Cutting Buildings Over To the New PACS

Also, since it won’t be practical to throw a switch to turn on a new system at all doors as a building’s equipment comes online, this customer can eventually use their existing handheld badge readers as they activate a building. Connected to their new system, our XPressEntry Handheld Badge System for Access Control can be used for guard-controlled access at the facility front doors, allowing only the right employees to gain access to areas where they had correct permissions.

This company was thrilled on a number of levels by working with Telaeris and we were thrilled to be able to help an existing client solve a huge headache along their journey. 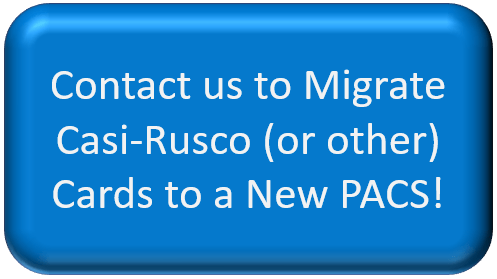 And maybe your company can save $100K in your access control upgrade and keep your existing credentials.